The National Dairy Council recently held a webinar, “Fuels of Engagement: [Dairy] Myth Busting and Science Trusting,” to address the increasing concerns many consumers have about cow’s milk and dairy products. The online lecture was given by Leslie Bonci, a nutritionist consultant and sports dietician with several national clients. She is also a seasoned ambassador for the National Dairy Council, a member of the Whey Protein Advisory Panel and the Monsanto LEAD network. Bonci addressed five of the main concerns revolving dairy, and we assembled the Switch4Good team to listen in. Despite the selective evidence presented, our questions went unanswered, and Bonci could not dispel these dairy “myths.”

Through a series of slides and studies backed by various dairy organizations, Bonci emphasized the nutritional benefits of cow’s milk. She stated that dairy includes 9 essential nutrients, including calcium, protein, vitamin D, B vitamins, phosphorus, and vitamin A. The point seemed to be that cow’s milk is a truly unique food that is not nutritionally replicated by any other food. However, this is true of the vast majority of foods. Each has a different nutritional profile, and each provides different micronutrients in various quantities. For example, a sweet potato contains protein, vitamin A, magnesium, vitamin C, iron, vitamin B6, potassium, and protein. A banana has its own bundle of beneficial nutrients. The solution to optimal health and protein intake, backed by the Harvard School of Public Health, is to eat a variety of plant-based foods, not rely on a single source.

Bonci dives further into the topic of protein, stating milk is a “high-quality” protein source because it contains leucine. Leucine is an amino acid found in protein, though some proteins contain more than others. It is known for being the most effective amino acid in regards to muscle protein synthesis. Its role is important, but can also be a danger if consumed in large amounts. A 2017 study published by Clinical Nutrition and Metabolic Care linked an increased risk of obesity with high amounts of leucine during early childhood. Further, cow’s milk is not the only source of this amino acid; soybeans, nuts and seeds, peanuts, and even seaweed are also substantial sources.

Shifting to appeal to athletes, Bonci asserts that cow’s milk is “nature’s sports drink.” Her leading argument? “It has fluid in it.” What else has fluid? Water. Fruit. Vegetables. Milk is not the only food with fluid. Realizing she needs to make a stronger case, Bonci also explains that cow’s milk contains carbohydrates, “high-quality” protein, electrolytes, and various nutrients. She also stresses the value of chocolate milk for athletes because of the additional carbohydrates (aka sugar) it contains. Chocolate milk is not a health food. In a 2015 study, researchers compared the recovery and performance benefits of chocolate milk and nondairy chocolate milk in a 4-hour cycling trial. They found that chocolate milk had no additional benefit over the nondairy beverages. For optimum athletic recovery after a long or intense workout, the importance is nutrient timing and consuming both carbohydrates and protein. Drink plenty of water, and try some hummus and pita or a hemp milk smoothie with nut butter instead of guzzling down a glass of chocolate cow’s milk.

According to Bonci, dairy foods can lower the risk of Type 2 diabetes as well as maintain bone health. She cites studies provided by the Dairy Good organization that show “high-to-moderate quality evidence” that dairy is associated with lowering Type 2 diabetes risk. However, this evidence is not conclusive. In fact, because cow’s milk stimulates the production of IGF-1, consuming dairy may actually stimulate the body to overproduce insulin, leading to an increased risk of this preventable disease. In regards to bone health, dairy foods have been shown to do more harm than good. A 12 year prospective study found an increase in osteoporosisotic fractures among women who consumed the recommended daily amount of cow’s milk. Research suggest this could be due to the high amount of phosphorus in cow’s milk. While this nutrient is necessary for the body to utilize calcium, an excess amount can lead to resorption of calcium from the bones.

While Bonci continually emphasizes dairy’s “crucial” role in maintaining a healthy body, she does concede that other foods do contain dairy’s essential nutrients. However, when attempting to debunk Myth #1, she notes that people would have to consume a far greater amount of food to match the nutrients in milk. Her example: one would have to eat 17 cups of kale to get the same amount of calcium in three glasses of milk. Yet, kale is not the only other plant-based source of calcium, and she doesn’t touch on bioavailability. About 49 percent of the calcium in kale is typically absorbed by the body, whereas milk is only at 32 percent. Pair a kale salad with some tahini dressing, another substantial plant-based source of calcium, and an individual will easily hit their calcium quota. Again, optimum health is about variety, not reliance on a single source. Nondairy foods are abundant and satisfying – beans, leafy greens, soy milk, tofu, tempeh, potatoes – the list of nutrient-dense foods is exhaustively extensive. So, if these nutrients exist in abundance in nondairy forms, dairy is certainly not a requirement for health.

Bonci asserts that those who are lactose intolerant should ease into eating dairy, opposed to avoiding it. She suggests people consume small amounts and build up their tolerance, eat lactose-free products, or try fermented dairy products like yogurt or cheese. However, if a person knows a food makes them feel ill, and their body is responding in a negative way via severely uncomfortable digestive issues, why should they try to force themselves to eat it? Based on Myth #2, we know that dairy is not essential to optimum health, and for the lactose intolerant, it isn’t medicine, it’s poison. Sixty-five percent of the global population is lactose intolerant to some degree. We shouldn’t be telling these people to suck it up and work around their symptoms; we should tell them how to find relief, and the simplest way is to ditch dairy.

Myth 4: Animal Care Is Not a Priority

This section of the webinar included a video series. Two multi-generation dairy farmers were featured to ensure the audience that their cows were treated humanely. To some extent, this may be true in the particular case of these small farmers. However, each admitted to separating newborn calves from their mothers within 48 hours of birth. The farmers claimed it was for the calves’ own good; the mother could be neglectful or accidentally harm the baby. But this is the risk all animals face – including humans – yet the vast majority of mothers are allowed the rights to nurture their own child. What’s more, independent dairy farms are becoming a scarcity in the US as farms consolidate and merge into more efficient industrialized operations with thousands of cattle. In just the first seven months of 2018, 382 dairy farms closed in Wisconsin, the nation’s second-largest dairy producer. At these large scale industrial dairy facilities, cows are not treated humanely; the crowds make them more susceptible to disease, and their lives are drastically cut short. The average life of a dairy cow is about five years; however, the natural lifespan of a cow ranges from 20 – 25 years. Even if the cows are “given a good life,” it is far too short.

Bonci leads this topic by addressing the importance of a sustainable diet, but dairy foods are anything but sustainable. Bonci points to a graphic that compares the resources used to produce a gallon of milk between 1944 and 2007. It may be true that dairy farmers now use 90 percent less cropland, 65 percent less water, and 63 percent less carbon to produce a single gallon, but that only proves the industry has become more efficient; it is not using less land, water, or carbon overall. In fact, the US produces over 40 million more pounds of milk per year than it did in the 1940s, necessitating additional resources.

Pivoting to the issue of hunger, Bonci simply explains that humans don’t eat cow food; therefore, the dairy industry is not a detriment to the issue of world hunger. She doesn’t reveal that the land used to grow feed could be used to grow human-edible crops. Further, dairy’s calorie conversion efficiency is just 40 percent, meaning less than half of the calories the cow consumes will result in edible calories for humans. Considering most plants are completely edible, the calorie conversion of plant-based foods is nearly 100 percent, though may be slightly less for foods with rinds and peels.

Finally, Bonci concedes that some foods do have an environmental impact, but she quickly dismisses this fact and proceeds to re-emphasize the nutrients in dairy. One fact does not negate another. It is irresponsible to continue to push dairy as a health food when it is critically impacting our environment and there are simple alternatives.

Throughout the webinar, Bonci continued to drive the nutrients point. Following her reasoning, since cow’s milk has nutrients, it is an essential health food. This is simply not true. Our world is rich with nutrient-dense foods, each with its own nutritional profile. No one food is essential to human health; it is about variety and balance. While dairy does provide protein and other vitamins, it comes at a high cost. Cholesterol, “natural” hormones, cortisol, trans fat, digestive issues, and a major toll on our world’s natural resources. The 8 grams of protein in a glass of cow’s milk simply is not worth it. 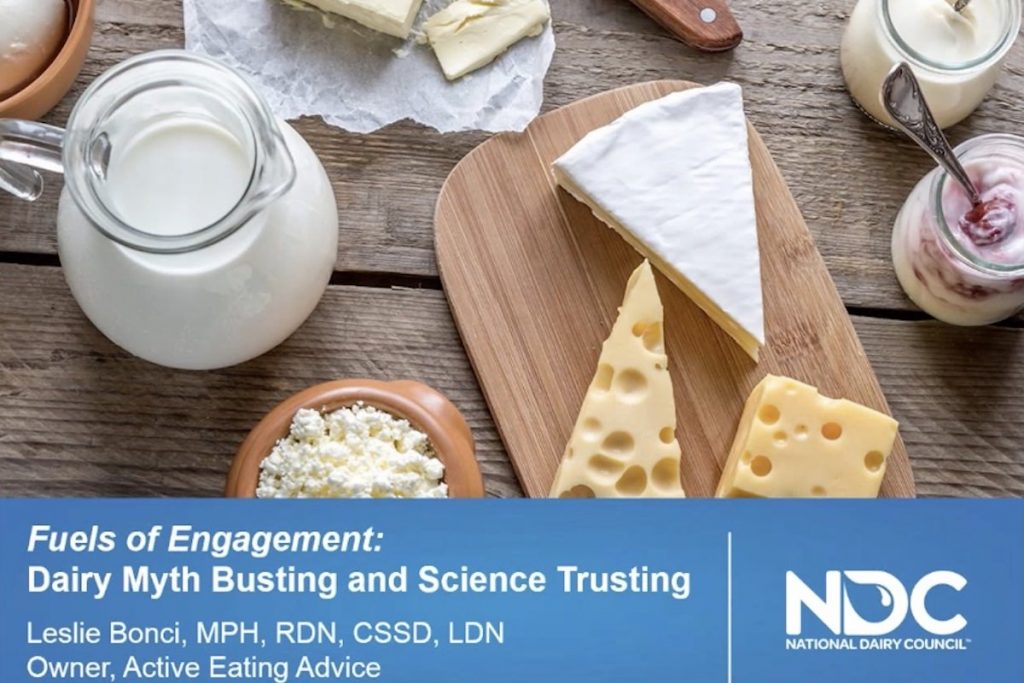 How to Do More For Others: Become a Food Not Bombs Volunteer

At Switch4Good, our motto is "Live better. Do more. Dairy-free." We are an organization of doers—people who go above and beyond to be the best they can be for themselves and others. During this time, some of us can harness that "doer" mentality and help others live... 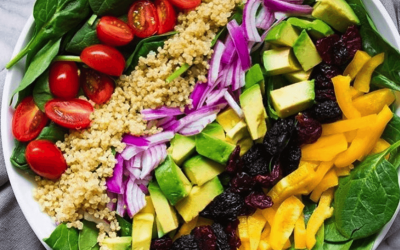 Tips for Delicious, Satisfying, and Dairy-Free Meals at Home

For many of us, we’re well into two weeks of self-isolation at home. The rare venture to the grocery store has led to guaranteed disappointment as we woefully stare at the empty shelves where toilet paper and our favorite non-dairy creamer once sat. Some of us are...

DAY 5! 5️⃣ What were some of your biggest stru

Our latest podcast is live! You will find it on ou

Our bodies see the components in #cowsmilk and att