Happy cows don’t come from California, but the Land O’ Lakes butter company has attempted to prove otherwise. Through false advertising, the brand assures the public that its cows live a docile life, but a recent undercover investigation of the Californian Land O’ Lakes dairy supplier revealed living conditions quite opposite to this sunshiny image. Switch4Good podcast co-host, Alexandra Paul, was part of this Land O’ Lakes investigation. We interviewed her to tell the boots-on-the-ground story and to learn more about the disconnect between marketing and reality in the dairy industry.

Switch4Good (S4G): When did you first hear that the Land O’ Lakes dairy farms may not be as idyllic as the company described them?
Alexandra Paul (AP): I was on a team of female activists from Direct Action Everywhere who rescued a calf from a Land O’ Lakes dairy farm in 2017. She was being held in a small wooden hutch that was exposed to the elements, lying in her own excrement, with no bedding at all. Due to this confinement, she couldn’t walk more than one step for the first months of her life. People think veal calves are kept in terrible conditions, but dairy calves are not much better.

I was shocked that the dairy industry was doing this to baby animals, so I looked deeper into Land O’ Lakes. I found repeated boasting from the company that one hundred percent of its farmers follow particular animal welfare guidelines. I decided to find out if this place was an anomaly or if the company was just lying about how its farms were treating their animals.

S4G: Why would a consumer question the statements dairy companies put out in regards to animal conditions?
(AP): Consumers don’t question Big Dairy, but they should. Land O’ Lakes relies on misleading language because it knows consumers want “humane” food, so it has to pretend its food is from happy cows to keep up with what their customers want. Because they are in reality raising these cows in factories instead of bucolic farms, they are able to sell their products more cheaply, too. So now Americans expect their dairy to be humane and inexpensive. But no dairy is humane and the government subsidies only make it appear cheap. So dairy is based upon lie after lie.

S4G: How many farms did you visit, and what did you see?
(AP): I documented 14 Land O’ Lakes farms in Wisconsin and California—the two largest dairy-producing states. Five of the farms were owned by current or former Land O’ Lakes board members. I saw calves exposed to 106-degree weather in the California desert and in snow below zero in Wisconsin. One farm in Wisconsin chained each calf to an igloo hutch, which is a plastic dome that looks like a dog house. The calves could go three feet outside the hutch before the chain tugged them back. If you did that to a puppy in this kind of freezing weather, you’d be cited for animal cruelty.

S4G: California is a large dairying state that has had issues with dairy marketing in the past. Do you see any overlap between Land O Lakes messaging and the Happy Cows Come From California campaign?
(AP): They are both deceitful attempts to entice consumers to drink milk by easing their conscience with these false ads, because Americans are becoming more sensitive to animal cruelty.

S4G: Have you come across other instances where popular dairy companies make false claims to market to consumers?
(AP): When you are selling a product that is unhealthy for people, cruel to animals, and bad for the environment, you have to mislead to get consumers to buy it. I have been focusing on Land O Lakes because it is one of the biggest dairy distributors in the world.

S4G: Are there any apps or tools you use to ensure a product is true to its messaging?
(AP): Yes, to some extent. You can go to http://whereismymilkfrom.com/ to figure out what farm the milk from any carton comes from. But the farm’s website will likely not present the actual conditions of the farm. A Google search “(Farm Name) undercover” is a good way to see if there have been any undercover investigations done on that farm.

S4G: Why do you support Switch4Good?
(AP): Switch4Good is a powerful voice. It has done amazing work lobbying to change the dietary guidelines, pressuring the Olympic Committee to stop promoting harmful products like dairy, educating athletes about the performance benefits of being dairy-free, supporting kids’ sports teams, and conducting scientific research into the performance effects of removing milk products from the diet. Dotsie is a joy to work with and I am also so proud to co-host the podcast with her. 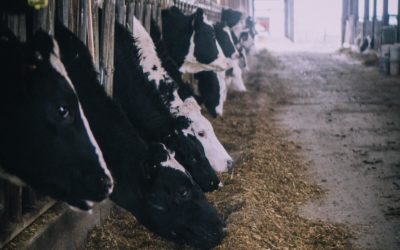 Facts: The Plight of the Dairy Cow

Dairy Cows There are 9.34 million dairy cows in the United States and roughly 270 million in the world. The majority of these cows spend their entire lives indoors in unnatural and unhygienic conditions.(1) Due to yearly forced inseminations, dairy cows endure...