Is Cow’s Milk Toxic for My Child?

Is cow’s milk toxic for my child? Most of us have heard that “lead is bad for you.” However, many of us don’t consider the reasons why or even know how to protect ourselves and our families from contamination. The recent lead poisoning crisis that received national attention in Flint, Michigan came about via contaminated drinking water, but there are other ways lead can enter our system—through our food. Specifically, cow’s milk.

Often called the “silent killer” by many pediatricians, lead is one of the biggest environmental hazards for kids and can invade a young child’s body surprisingly quickly. Once ingested, it seeps into the bloodstream and eventually causes IQ loss, behavioral problems, aggression, learning disabilities, mental and cognitive dysfunction, seizures, and brain damage. Even the smallest amount of exposure can permanently damage a child’s brain. There is no safe threshold, and the detrimental effects only increase over time.

Joan Dominique, a mother whose two children were exposed during the New Orleans lead crisis in the mid 90’s, recounts her children’s symptoms of hearing problems, ADHD, and learning disabilities.

“It just makes me angry because my kids are hurt and can’t succeed the way I know they should,” Dominique says. “These kids are working at Popeyes now.” (E)

Amy Gooder from St. Paul, whose younger daughter was exposed to high levels of lead in 2017, says,

“Lead doesn’t discriminate…It doesn’t matter if you fit the demographic or if your doctor thinks your kid needs to be tested…It almost killed my child and we thought we were doing everything right.” (D)

Lead poisoning is a serious and current issue, and it has presented itself within the dairy industry. Due to environmental pollution that often accumulates in industrial farming areas, lead poisoning is one of the most frequently reported causes of poisoning in farm livestock, with cattle being most commonly affected (C). In this way, cow’s milk can turn toxic.

A study by Vogt et al. published in Environmental Health Journal looked at dietary toxic exposure in children and found that, of the food groups they tested, dairy was the primary source of childhood lead exposure (A). The researchers strongly recommended consuming less animal products, emphasizing a reduction of dairy, to minimize the intake of toxic metals. 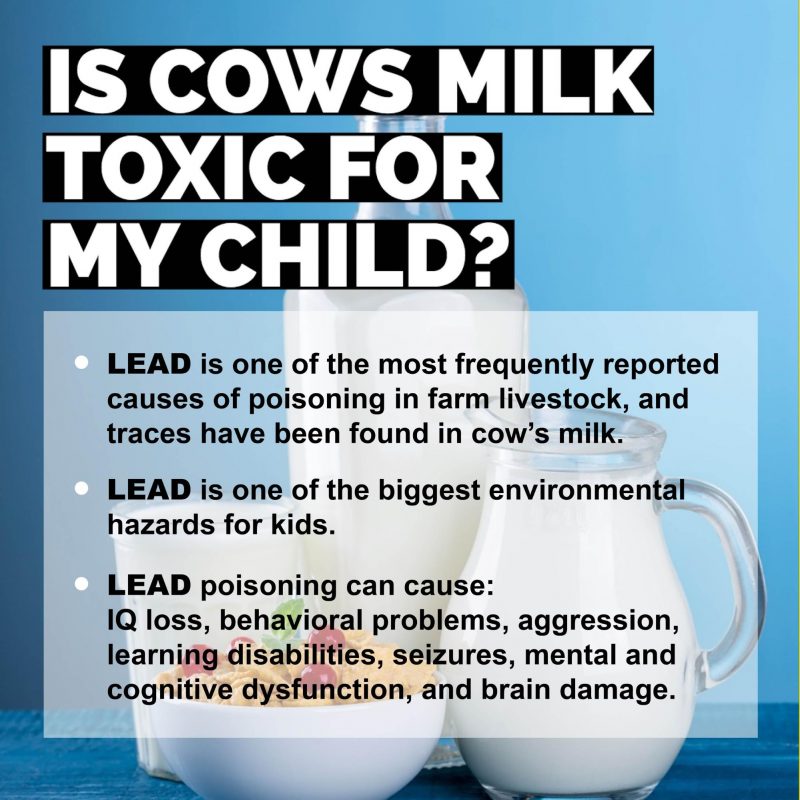 These findings can be particularly scary for those of us with growing children, as milk and other dairy products may be a large part of their diet. Many parents believe that cow’s milk is a necessary food to provide their child with enough calcium, but there are other, safer, sources available. What’s more, calcium can only be absorbed by the body within the presence of Vitamin D. Without this nutrient, the calcium in milk is irreverent. Though many commercially available milks are fortified with Vitamin D, many vegetables, legumes, and fruits naturally contain these key nutrients – no modification required.

Try a serving of chia seed pudding, half a cup of edamame, or a baked potato drizzled with tahini. Each of these foods not only contains a significant source of calcium, but the calcium is also highly bioavailable, meaning the body can easily absorb and utilize the nutrient. These foods also provide heart-healthy fats, fiber, and protein. Dairy commercials may claim that 1 out of 2 kids aren’t getting enough calcium, but what they fail to mention is that milk isn’t the only solution.

Parents are not to blame for incorporating potentially lead-contaminated dairy in their children’s diet; they have been led to believe that cow’s milk is a health food, thanks in part to the USDA and the enormous influence of the dairy industry. Directed by lobbyists and outdated nutritional information, the USDA recommends growing children drink 2 – 3 glasses of cow’s milk a day, and this recommendation is enforced through television and print ads that have become a fixture in our lives.

For example, this year, the California Milk Processor Board dropped $16 million dollars in their new and improved “Got Milk” campaign to specifically target millennial California families (B). Of course, nowhere in this ad does the industry mention the possibility of lead contamination, and parents continue to purchase food that could be dangerously detrimental to their families’ health.

Of course, not all milk is contaminated with lead, and not all cow’s milk is toxic, but the question remains: as a parent, do you want to take that risk? There is no need to sacrifice nutrition to avoid lead contamination; plenty of plant-based foods offer the same, if not superior, nutritional content as milk – without taking a gamble on lead. Food should be enjoyable, nutritious, and safe. And cow’s milk just doesn’t cut it.

For more information on dairy and kids, check out our post on why it’s time to rethink your child’s daily dairy. 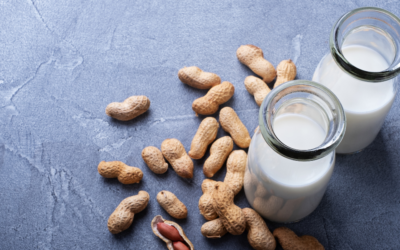