In Big Dairy’s effort to update “Got Milk?” campaign / slogan, MilkPEP (Milk Processor Education Program) debuted its new “You’re Gonna Need Milk for That” marketing campaign in March of 2021. It touts the nutritional and performance benefits of cows’ milk for athletes, apparently piggybacking off the “Built With Chocolate Milk” campaign.

In early November this year, Dairy Milk sponsored women who were running in the NYC marathon. Michelob Beer did too, if that gives you any idea about how relevant sponsors’ products are to athletic health and performance.

The female athletes sponsored by Dairy could be seen flexing and smiling on a billboard in Times Square, the text on the billboard beside them read “Join Team Milk.” On the surface, it certainly seemed like a noble effort – promoting women in sport and contributing to the end of disparity between male and female athletes. However, Dairy essentially took a page out of Big Tobacco’s 1929 “Torches of Freedom” campaign playbook – an attempt to make cigarettes a symbol of female emancipation.

Dairy’s efforts to “Nikeify” milk deserves scrutiny. While you may feel a bit more warm and fuzzy about milk through this appealing, slick and personal campaign, you may also literally feel an upset stomach and other health problems after consuming milk.

Some of the claims the campaign’s website “GonnaNeedMilk: Every. Woman. Sponsored.” makes are: cows’ milk hydrates better than water, helps you stay active longer, helps build muscle; and milk’s protein helps you recover and its nutrients support a healthy immune system.

The facts, however, tell a very different story and bring a lot of clarity to that glass you’re about to chug.

Saturated Fat:  Whole milk, which outsells skim by 5 to 1 in the U.S., contains 10 grams of saturated fat per 16 oz serving. That’s just three grams below what the American Heart Association recommends as your daily intake. Saturated fat can constrict blood vessels and slow blood flow to working muscles. As you’d guess, this inhibits athletic performance (1).

Lactose Intolerance: More than one in three Americans (and 80-95% of African Americans and Asians) are lactose intolerant.  That means these folks can’t digest lactose, a sugar found in cows’ milk. This causes a variety of uncomfortable symptoms, including: diarrhea, bloating and gas, abdominal pain, nausea,vomiting, headache, muscle pain, joint pain, mouth ulcers, urinary symptoms, loss of concentration, and more (2). This is problematic for anyone, but especially for athletes trying to maximize their performance.

Mucus: Dairy proteins, particularly casein, which make up 80% of cows’ milk, have been shown to increase mucus production in the gut and respiratory tract. Many researchers believe that increased intestinal permeability, which has been linked to poor diet, disease, and strenuous exercise, allows the casein and other proteins to leak through the gut and therefore stimulate excess mucus production (3).

Lung Function & Breathing: Our bodies often see cows’ milk proteins as foreign substances and frequently mount an immune defense. This can affect lung function, making it difficult to breathe. (4) As you’d guess, athletes are particularly dependent on being able to breathe well! Additionally, cows’ milk contains the foreign components Neu5gc and D-galactose – sugars that many people’s bodies do not recognize. This initiates an immune response, resulting in chronic inflammation and oxidative stress (4). Chronic inflammation is associated with a host of diseases and health-related issues, but it’s also the greatest inhibitor of recovery from intense training, presenting a huge problem for athletes.

The United States Department of Agriculture says that soy milk is the nutritional equivalent of dairy, with none of its negative effects. According to the USDA: “Fortified soy milk and (soy) yogurt with added calcium, vitamin A, and vitamin D are a part of the Dairy Group. This is because their nutrition content is like dairy milk and yogurt.” Nourishing plant milks have become ubiquitous. Healthier options abound.

As Big Dairy continues to erroneously prop up bovine lactate as a sports drink, some of the world’s most accomplished professional athletes have chosen to eschew dairy altogether, and for good reason. Dairy’s steady flow of health claims is marketing, not science. And, dozens of today’s most elite athletes quit milk (and meat) because they know better.

By: Dotsie Bausch, an Olympic silver medalist, TEDx Speaker, and Executive Director of Switch4Good – a nonprofit dedicated to dispelling misinformation about dairy. 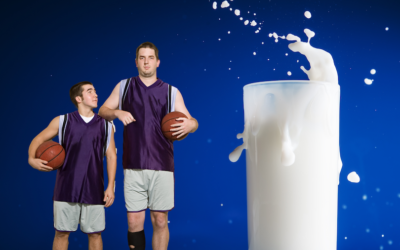