In 2015, it was revealed that a Paleolithic (emphasis on “paleo”) stone pestle discovered in a cave in Italy had remnants of oat dust and still-intact bits of grain on it. That’s right. Our ancestors were grinding oats for the purpose of consumption. Whether it was for bread or for porridge, the fact is, human beings have been consuming oats, in some form or another, for approximately 32,000 years, and oat milk has sparked the latest craze in the plant-based milk world, effectively supplanting almond milk in popularity in multiple countries. With its inherent creaminess and neutral taste, oat milk makes a wonderful addition to smoothies, lattes, cereals, or desserts. But what, if any, nutritional value does this versatile grain have in beverage form? We’re here to answer the enduring question: Is oat milk actually good for you?

Compared to its plant milk peers, oat milk does have the highest amount of calories due to its energy-boosting carbohydrate content stemming from fiber-rich oats. The calorie content in oat milk also varies from brand to brand and depends on whether there are added sweeteners or oils. For example, Oatly Full Fat Oat Milk comes in at 160 calories, whereas Minor Figures Oat Milk comes in at 90 calories per serving.

While oat milk is not typically high in protein – containing one to three grams of protein per serving – it beats out almond and coconut milk in protein content, and again, varies from brand to brand. And, while it doesn’t contain the nine essential amino acids found in soy milk, oat milk is chock-full of healthy fiber which keeps you feeling sated longer.

Oat milk does not contain lactose – a type of sugar that is produced in mammalian nipple secretions and a source of suffering for those who can’t digest it. Oat milk has zero cholesterol, while whole milk contains 24 milligrams of cholesterol and two percent contains 20 milligrams. And while oat milk only contains 0.5 grams of saturated fat, the saturated fat content of whole dairy milk comes in at a massive 4.5 grams. 2 percent dairy milk comes in at 3 grams per serving.

Oat milk boasts more fiber than any of its plant milk siblings, and beta-glucan, the type of soluble fiber in oats and oat milk, has been shown to lower cholesterol in both men and women (1). Foods with beta-glucan have also been linked to stronger immune systems and healthier guts due to their positive impact on the gut microbiota (2)(3).

Free of common allergens, if you suffer from lactose intolerance, or have a dairy, soy, coconut, or nut allergy, oat milk is a safe and tasty beverage of choice. However, some oat milk may be processed in plants that process other grains and therefore contain gluten. Make sure to check the label if you have a gluten sensitivity and consult with your healthcare provider before drinking oat milk if you suffer from celiac disease (4).

The majority of oat milk brands fortify their milk with B vitamins (riboflavin and B12), calcium and vitamin D. Riboflavin (B2) helps the body break down fats, proteins and carbohydrates for the production of energy, while vitamin B12 nourishes the brain and plays an essential role in the formation of red blood cells. Calcium and vitamin D are essential to maintain good bone health. Vitamin D helps your body absorb calcium. Oat milk, much like many plant-based milks, has faced unwarranted criticism from plant milk naysayers and dairy advocates for being fortified, but it’s important to note that dairy milk is fortified with vitamin D (which, by the way, is actually a hormone, not a vitamin) as well.
Quality and nutritional components vary from brand to brand, so check the label if you are trying to avoid certain ingredients like added sugars, which may be added for additional sweetness.
The other wonderful thing about oat milk is that you can make it at home to avoid unwanted additives or risk of gluten contamination. Just be mindful that the vitamins included in fortified brands won’t be naturally occurring if you choose to make it yourself.
If you’re interested in taking a deeper dive and making your own thorough nutritional and environmental comparison between plant milks, check out our milk calculator to learn more.

Compare your favorite milks with the Milk Calculator 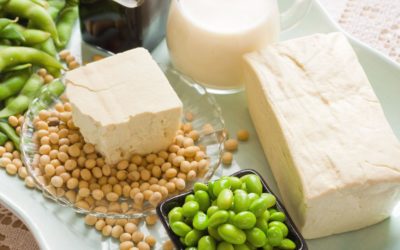 Women's Health and Hormones It’s no secret that women run this world. Especially healthy, strong, energized women who are fueled by soy. Despite the bounty of misinformation out there, soy products like tofu, tempeh, soy milk, and edamame are incredibly beneficial for...