Soy is the original plant milk. While consumed for literally thousands of years in Asian countries, it came to be a “hippy” staple in the States decades ago. Due to its duration, it’s somewhat been overshadowed by newer, cooler plant milks. First almond pushed soy off its pedestal, then oat came in and truly sparked the plant milk craze. Some coffee shops in the US even stopped carrying soy, thinking it outdated. Little do people realize that soy is an amazing milk. It’s a nutritional powerhouse, culturally relevant, and makes the best espresso beverages. Here are five facts about soy milk that you need to know the next time you cruise down the plant milk aisle.

1. Soy milk is a complete protein

Unlike many plant-based foods, soy milk contains all nine essential amino acids. The human body needs these amino acids for a wide range of functions, including muscle building. Our bodies make 11 of the 20 necessary amino acids, and we must obtain the other nine from food. Only a few plant-based sources offer all nine essential amino acids. These include quinoa, buckwheat, hemp seeds, algae, and soybeans. This isn’t to say incomplete plant-based protein sources are inferior—one can easily get enough complete protein by eating a varied, plant-based diet. However, in situations of food scarcity or poverty, it is beneficial to rely on complete protein sources like soy milk. For example, children who receive free or reduced school lunches may benefit from consuming soy milk as many cannot rely on any other food source. Like cow’s milk, soy contains eight grams of protein per eight-ounce serving. Unlike cow’s milk, it is free from cholesterol, trans fats, and inflammatory compounds like Neu5gc. Without question, soy milk is the optimal choice compared to cow’s milk.

Soy contains phytoestrogen—a plant-based estrogen that can bond to estrogen receptors in the human body. This fact has many concerned that soy may cause adverse hormonal effects—from growing “man boobs” to increasing one’s risk for breast cancer. Neither are true. In humans, phytoestrogen actually has the ability to block excess estrogen, therefore helping to balance estrogen levels in the body. Like any food, it shouldn’t be consumed in excess, but a daily soy latte and a tofu scramble will not jeopardize your health. So what does excess look like? If you were to consume a cup of soy milk with cereal, a soy-based burger for lunch, a 16-ounce soy milk latte, a tempeh stir-fry for dinner, and a scoop of soy-based ice cream for dessert, that might be overdoing it. If you’re enjoying two to three servings of minimally processed soy a day (soy milk, edamame, tofu, tempeh), you’ll be more than fine—you’ll be doing your health a favor.

The dairy industry is constantly touting cow’s milk superiority for it’s “optimal” calcium and vitamin D content. What the milk marketing fails to mention is that only about 33 percent of the calcium in milk is actually absorbed by the human body, and milk does not naturally contain vitamin D—all commercially available cow’s milk is fortified. Many leading brands of soy milk—such as Silk—also fortify their beverages. A quick note: fortification is nothing to worry about; it’s fairly common in food products and a standard across store-bought orange juice, bread, and breakfast cereals. Soy milks that are fortified contain up to 30 percent of one’s daily calcium and 15 percent of one’s daily vitamin D. This is why the USDA states that fortified soy milk is a nutritionally equivalent alternative to cow’s milk. Soy is a nutritional powerhouse!

Move over oat and almond, the OG makes the best foamy espresso beverages. As a former barista and one-a-day-latte fanatic, this writer knows her way around an espresso machine. Soy is the optimal plant milk for creating super silky foam that makes your eyes roll back. You need fat to create foam, and soy has around four grams of unsaturated fat per serving. Oat milk also contains a healthy amount of unsaturated fat, but the taste isn’t completely neutral. If you want to truly experience the espresso, soy is the way to go. Cow’s milk also contains fat, but it’s a whopping eight grams and the majority of it is saturated fat (the unhealthy kind). The next time you order a latte, cappuccino, flat white, or cortado, swap in soy!

5. Soy milk has been around for thousands of years

While soy milk is now common in Western countries, it originated in Asia thousands of years ago. Chinese farmers were the first to cultivate soybeans, and from there, people manipulated these beans into foods such as tofu, tempeh, and soy milks. In China, a typical breakfast may include a bowl of warm, sweetened soy milk. When learning about a food, it’s essential to know its cultural origins—how does it fit into the diet, both nutritionally and from a societal standpoint? Soy was an affordable source of wholesome protein, and it remains true to that function today. So, go ahead and pour that soy milk into your morning smoothie or sip on a soy hot cocoa—you’re doing your body good. 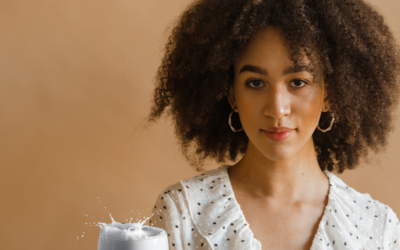 Is milk really good for you? After spending years reviewing the research and diving into scientific studies, here are 9 reasons why milk is bad for you.